Hand of a zombie
Hand of a Burer (x4) 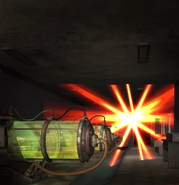 Crude map of the X2 laboratory. Refrain from entering the elevator above ground floor.