Nothing worthy of a special visit.

X16(Lost Alpha) is a major location appearing in all versions of the S.T.A.L.K.E.R.: Lost Alpha standalone Mod.

This splits into five phases: 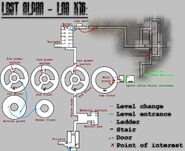 Crude map of X16 with adjacent tunnels in the level after.
Community content is available under CC-BY-SA unless otherwise noted.
Advertisement