The Small toolkit is a quest item featured in the S.T.A.L.K.E.R.: Lost Alpha standalone mod.

Known locations for this item in versions before v1.4005 are:

Known locations for the repurposed item starting with v1.4005 are:

A target item for the following quests or side missions: 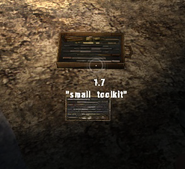 Location detail in Swamps
Add a photo to this gallery
Retrieved from "https://lost-alpha.fandom.com/wiki/Small_toolkit?oldid=31455"
Community content is available under CC-BY-SA unless otherwise noted.