Necessary for survival
of the player

The Sleeping bag is a basic equipment item featured in S.T.A.L.K.E.R.: Lost Alpha.

Sleeping bag is an item which allows the player to rest. It is found in the dresser in Sidorovich's bunker. It can be sold to almost any non-hostile NPC and bought from Traders. When used, the screen turns black and the character snores for a short amount of time and a random dream may occur. Character can die from mutants while asleep but sometimes sleeping may help surviving emissions.

The Sleeping Bag is acquired when you begin the game and take your gear from Sidorovich's bunker. After a while, your character begins to get tired. If you don't sleep he will begin to state that he could sleep just about anywhere and promptly pass out. When you use it the screen turns black and the character snores for a short amount of time, and a random dream may occur. Best used in a safe location free from enemies and blowouts. 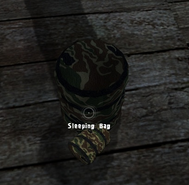 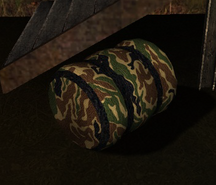 World model profile
Add a photo to this gallery
Retrieved from "https://lost-alpha.fandom.com/wiki/Sleeping_bag?oldid=13325"
Community content is available under CC-BY-SA unless otherwise noted.