The Shell is an artifact that appears in S.T.A.L.K.E.R.: Lost Alpha and all canon S.T.A.L.K.E.R. games. In Shadow of Chernobyl it is named the Flame Battery. 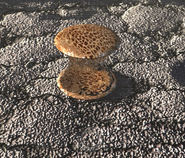 In-game view of the artifact

In-game view of seven of the artifacts.
Community content is available under CC-BY-SA unless otherwise noted.
Advertisement