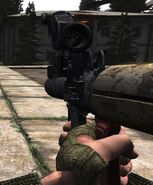 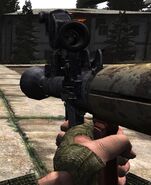 After selling it to any NPC, the NPC immediately switches to the RPG :)
Ammunition