The Mercenary faction is a group of private military contractors operating within the Zone, though their exact base of operations is kept highly secret.

Mercenaries are experienced fighters from all walks of life who offer their services as hired soldiers. They are perhaps ex-military soldiers, ex-special forces operators, underground fighters such as elite resistance/guerrilla troops, a private military company or notorious terrorists of various nations who offer their services to the highest bidder. Having seen combat outside of the Zone, the mercs are capable of dealing with virtually any kind of armed resistance using careful tactics, military precision, and excellent equipment. However, their only drawback is that they lack the extensive knowledge of the Zone that many Stalkers have.

Mercenaries often charge their clients large amounts of money or anything of the same value (artifacts for example).They are usually hired by wealthy and powerful corporations to retrieve artifacts and other unique objects in the Zone.

It is this bit of unpredictability than has earned all mercenaries the distrust of most stalkers as they fear that they might get a bullet in the head than a mutual understanding when talking to mercenaries.

Mercenaries have some of the weakest mid-level armour in the Zone with their Mercenary suit having a bulletproof base of 20%, only 5 points better than an SSP-99 Ecologist or a Bandit jacket. The use of SEVA suit is confined to the Trader Milo, and Exoskeleton use is rarely seen in S.T.A.L.K.E.R.: Lost Alpha. 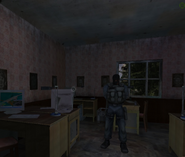 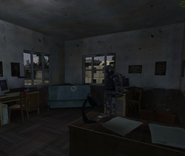 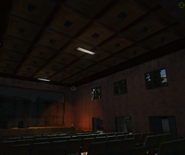 HQ of the faction in Dead City.
Community content is available under CC-BY-SA unless otherwise noted.
Advertisement