Tools for fine work inside the big water tower (highest level) in the north-west corner of the map.

Aerial view of the city

"Shining a light in the darkness"

A road out of town

Mostly dried up river under bridge

Entrance to the Swamps

"Ivan soon regretted wishing for a more "peaceful" park when he woke up... "

Aerial view of the city center

"A path to somewhere"
Add a photo to this gallery 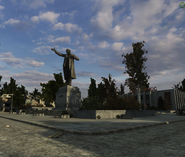 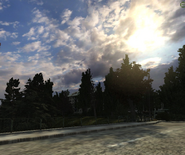 Entering the city from Rostok

Heavy radiation in this building

Stash under the bridge

Cultural center as seen from the roof of the Admin center.

Sports center as seen from the city square.
Add a photo to this gallery
Retrieved from "https://lost-alpha.fandom.com/wiki/Dead_City(Lost_Alpha)?oldid=31434"
Community content is available under CC-BY-SA unless otherwise noted.