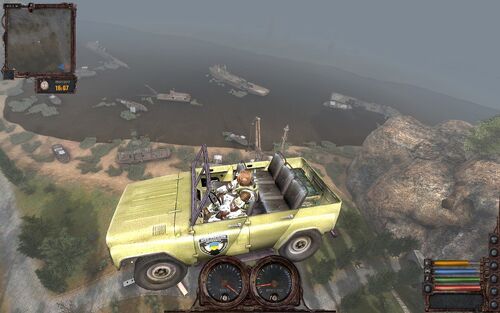 As page name suggests, here are some helpful cheats using the console for S.T.A.L.K.E.R.: Lost Alpha.

Although mods for S.T.A.L.K.E.R. games made to suit various purposes exist, there are however much easier console commands for the Xray Engine as well. These may actually be more helpful than creating an exoskeleton that can run with 400kg. Biggest "cheat" mentioned here is the console command- jump_to_level, which is the main subject of this page.

As mentioned above, this a console command which instantly takes the player to the desired map. Proven safe, with no game corruptions or unusual level of CTD occurring.

This is an extremely handy tool. It can carry the player past entire unnecessary maps when going to their next mission marker, or it can make looting easier, faster and fun! See Examples which are shown below. Mapjumping may be used while in a vehicle as well, teleporting both player and vehicle to the destination.

How To Use Command

For the player to use the console command, simply open console (default: `) and hit letter "J". "jump_to_level", should be the first option to pop up, and player may use "down arrow" on the keyboard to locate it, or just type the command manually. Next, hit space-bar, and then type or paste (default: CTRL + V) level file names listed below. Then hit ENTER. This will load the player's actor into the specified level.

Getting into 100 Rads Bar can be annoying from Garbage or Forest level changers. But it doesn't have to anymore! If the player types "jump_to_level la07_military", they can enter from the Military Warehouse level changer instead. No hassle, takes less time, and no more ammo wasting on obnoxious pseudodog packs in the bar area! Caution: depending on vehicle, jumping levels in a vehicle from the Military Warehouse to the 100 Rads bar area is a trap, with a level changer in front, a nasty anomaly behind and many trees blocking the sides.

When the player has to go to Lost Factory through Radar and Countryside, Radar may now simply be bypassed with "jump_to_level la19_country". Player must still go through Countryside for scripted blowout/Ecologist rescue, but now the player doesn't have to travel through Radar wasting medkits from the pesky psi-damage effects.

Oh no! Player frisks a corpse, and stash coordinates pop up on the PDA! But the stash is all the way over on another map, where the player has no missions! But do not fear, Now using "jump_to_level la22_forest", player can dash through, grab stash, and then get right back at it again!

This is another console command which is also very helpful and with no negative side-effects other than stalkers thinking you're a wimp.

If the player is facing a particularly tough challenge, like of the Lab X-7 where the computer (as Matrix) attacks the player, and the player cannot kill by any conventional means, you can use this command to grant invulnerability/unlimited stamina/unlimited carryweight. Or you can use it throughout the whole game, wimp!

How To Use Command

To activate "God Mode", the player must open the console (default: `) and type "g_god on".